I couldn’t help myself, but the bees arrived! Two packages of just tickled pink Italian Honeybees arrived on Sunday. Mike was worried about them all day Saturday, and made sure we were hours early to pick them up on Sunday.

I bet the gentleman who sells the bees (in Damascus, Maryland) has a lot of fun and laughter to see us newbie beekeepers get their hives, get their bees, and on the field day. I say this because Mike talked his ear off for 10 minutes about what we’ve done and what we’re doing and what’s he’s seen the “Beeman” (his new favorite beekeeper) do.

But I can’t judge him, as it’s an exciting adventure and it’s something he’s excited about. And let me tell you, there are few things that Mike is visibly excited about. Beekeeping appears to be one of them.

So we picked up our bees (buzzing in the back of the car and making me nervous!) and went home. Of course, 10am was a little chilly this Sunday to install bees, and he had lunch with the neighbors and house chores to do, so it had to wait.

Finally, hours later and only once our neighbors admitted to having to lunge their horses and stop socializing, we went to install them. Mike did most of the heavy work as I participated from afar, but I did hold the queen cages while he shook the packages in. That helps, right?

Since I didn’t get pictures of all the steps, here’s what we did with the few pictures I do have to follow: 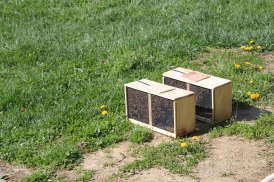 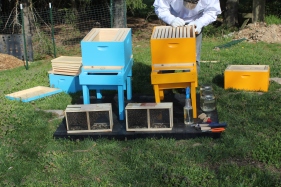 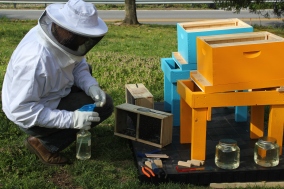 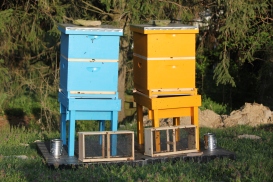 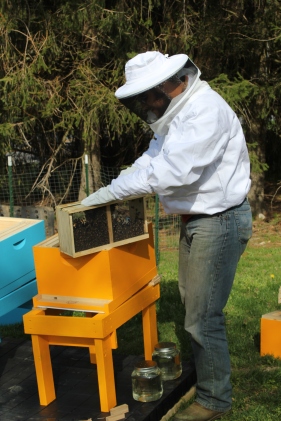 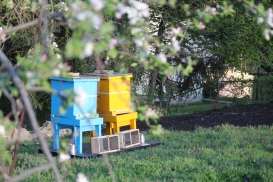 We left the packages out by the hives overnight, but noticed the next day that there was still a good cluster in one of the packages. Sadly, we found out later Monday night that many of these were dead bees–Mike was fretting and worried, but we’re sure the ladies will bounce back in no time. And boy are they loving the apple tree that’s in bloom!